The vital function of this system is the production and development of the sperm or male reproductive cells.

The different organs of this system and their associated functions are as follows:

Disorders of the male reproductive system can be a result of damage or malfunctioning of any of the above-mentioned organs.

Male infertility and prostate cancer are perhaps the most common disorders that affect the male reproductive system.

Some of these disorders are treatable while some can have serious consequences.

Properties of Turmeric that help in male reproductive system disorders

Turmeric is a spice common to India and other Asian countries.

Coming from the ginger family, this spice consists of a golden yellow rhizome from which the yellow powder and oil are extracted.

Blessed with a number of medicinal herbs, this spice is perhaps the hottest topic in the field of research.

Curcumin, its active ingredient, is said to be responsible for its medicinal properties.

Here are a few pharmacological properties of turmeric that could be of relevance to the treatment of male reproductive system disorders:

Research suggests that turmeric and its bioactive element can help in treating the following disorders linked with the male reproductive system.

Prostate cancer is cancer of the prostate gland. This gland contributes to the development of semen.

It generally occurs at an older age but can spread to bones and other parts of the body.

Curcumin acts at molecular levels to inhibit growth of the tumor, destroy cancerous cells and prevent the spread of cancer. Variety of compounds has been derived from curcumin that inhibit the growth of human prostate cancer cells.

Curcumin potentiates the effect of bicalutamide, a drug used in treating prostate cancer.

Docetaxel is the first line of treatment for surgery resistant prostate cancer. Curcumin is proven to increase the sensitivity of such cancerous cells to docetaxel.

2. It helps reduce inflammation in Prostatitis

Prostatitis is the inflammation of the prostate gland. Sometimes the cause could be a bacterial infection.

It is characterized by pain in the genitals and lower back and discomfort while urinating.

Curcumin in combination with other herbal extracts was tested for its effect of bacterial prostatitis.

Group A received antibiotics and herbal extracts while Group B received only antibiotics.

90% of the patients receiving the duo showed improvement while only 27% of the patients in group B recovered completely within one month. Within 6 months of treatment, no patient from Group A had a recurrence of prostatitis.

Animal study proves that curcumin is effective in treating non-bacterial prostatitis. In this study, curcumin reduced the levels of pro-inflammatory agents such as tumor necrosis factor and interleukin and in turn controlled inflammation.

Turmeric’s anti-inflammatory and anti-microbial property can help treat and prevent recurrence of prostatitis.

Prostate enlargement or benign prostate hyperplasia is increased in size of the prostate gland. It affects almost all older men.

It increases the risk of developing cancer.

Meriva, a special formulation of curcumin designed to increase its absorption in the body, is helpful in treating symptoms of benign prostate enlargement without causing side effects.

24 weeks of treatment with Meriva improved quality of life and reduced episodes of urinary infections in patients.

Meriva, the popular formulation of curcumin, has a therapeutic effect on symptoms of enlarged prostate. This indicates turmeric taken as such can also be of help in this case.

4. It may help in Erectile dysfunction

Erectile dysfunction or impotence is a sexual malfunction affecting millions of males. It is a result of psychological and physical causes.

Heart diseases, diabetes, use of tobacco and enlarged prostate gland are few of the causes.

Animal studies prove that a novel water-soluble derivative of curcumin is better than Viagra and Cialis (Sildenafil & Tadanafil) in treating erectile dysfunction. 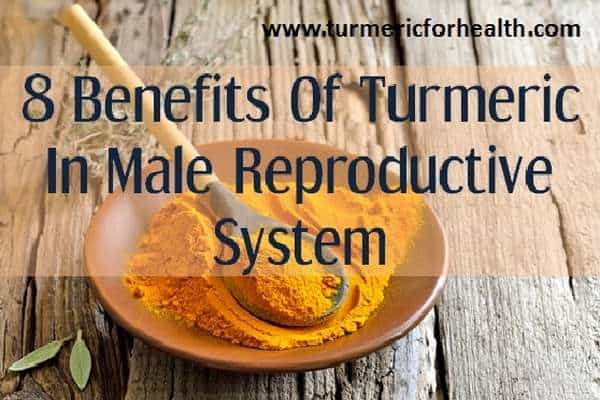 Testicular cancer can affect either one or both of the testis and generally affects younger men.

It has the highest cure rate among other types of cancer.

Curcumin’s therapeutic value in relation to testicular cancer has been researched upon.

An experimental study proves that curcumin can destroy cancerous cells and prevent their proliferation by inhibiting the activity of AP-2γ. AP-2γ is a type of protein that is involved in cell survival and proliferation and is a marker of testicular cancer.

Bleomycin is a drug generally used in the treatment of testicular cancer.

It causes oxidative stress (imbalance between pro-oxidant and antioxidant agents in the body) which leads to cancerous cell death.

Concurrent use of curcumin and bleomycin is proven to cause cancer cell death by increasing the activity of enzyme caspase (actively involved in apoptosis or cell death).

Also using curcumin can help in lowering the dose of bleomycin which in turn reduces side effects.

However, this effect is probably dose dependent as another study by the same researchers proves that curcumin inhibits the anti-tumor activity of bleomycin and the dose used here is different from that used in the study previously.

Nevertheless, curcumin is said to benefit in cancer by manipulating several biochemical pathways.

Curcumin can aid in treating testicular cancer individually or in conjunction with chemotherapeutic drug.

6. It can help in Testicular torsion

Testicular torsion is a condition in which the cord from which testicles are suspended rotate and cut off the blood supply to the testicle.

It increases the level of antioxidant enzyme and supports spermatogenesis.

Curcumin can protect the testis from damage caused by torsion and loss of blood supply.

7. It fights infection in Gonorrhoea

Gonorrhea is a condition characterized by inflammatory discharge from the urethra caused by bacterium Neisseria gonorrhoeae.

This infection is associated with the risk of bladder cancer.

Research proves that vitamin D and curcumin combination can prove to be effective anti-microbial agents that act against drug-resistant N. gonorrhoeae.

Curcumin alone is also effective in treating the infection.

Curcumin alone or in combination with Vitamin D serves as a potent anti-microbial agent that can destroy drug resistant bacteria that cause gonorrhoea.

Exposure to environmental toxins, smoking, and the presence of other disorders or use of medications can cause male infertility.

Streptozotocin, an anti-diabetic drug is said to cause testicular damage due to oxidative stress and curcumin ameliorates this damage by employing its antioxidant nature.

It also plays a protective role against toxicity induced by environmental toxins such as cadmium, chromium, insecticides and plastic derivatives.

Nicotine (Tobacco smoking) and chronic alcohol administration is proven to cause infertility and curcumin has a therapeutic effect on them.

Curcumin can prevent male infertility caused by toxicity and support production of sperms by ameliorating the damage.

Surprisingly few studies suggest that turmeric has an anti-fertility or anti-spermatogenetic effect suggesting that it could be developed into a novel non-hormonal contraceptive.

However, one research study proves that turmeric’s anti-fertility effect is reversible- upon withdrawing consumption of aqueous extract of turmeric the male fertility parameters are restored to normal.

Whether this effect is dose dependent or caused by compounds other than curcumin is not known. And these results are obtained from animal studies. Also, they are focused on direct exposure of sperm cells to curcumin.

More research in this aspect is required to clarify the issue. No study in humans has shown that turmeric affects sperm quality or causes infertility when taken orally. So you can safely consume turmeric.

The best way of using turmeric is to include it in your diet. You can make the Golden Paste and add a dollop of it to your salad, soup or rice preparation. Turmeric Milk on a daily basis should help.

You can browse the website for a couple of more recipes with turmeric.  Check this link for a list of good brands of turmeric powder and supplements.

Turmeric as a spice is safe. But when it comes to supplements you should consult a doctor before taking it for the appropriate dose and to avoid undesirable interactions and allergies.

Avoid turmeric supplements in case of pregnancy and lactation.

Discontinue turmeric supplements 15 days prior to surgery as it has blood thinning activity and might affect surgical outcome.

If suffering from gallbladder problems or gastrointestinal disorders avoid turmeric.

Improvement in all symptoms was seen in both groups. Overall results and quality of life improved significantly in Meriva group. No side effects were observed. Additionally, Meriva brought about a decrease in urinary infections and urinary block.

How did this happen?

Curcumin’s potent anti-inflammatory activity serves to be therapeutic in case of benign prostatic hyperplasia. It helps in reducing inflammatory markers of the disease.

Regular treatment for enlarged prostate involves anti-hormonal agents which do not help in reducing inflammation. Non-steroidal anti-inflammatory agents pose side effects which if taken on long term can damage the prostate gland.

Therefore curcumin can serve as an adjuvant treatment to standard therapy

Meriva, a specialized formulation of curcumin, helps reduce the symptoms associated with benign prostatic enlargement and also protects from side effects of conventional treatment.

Turmeric benefits the male reproductive system by serving to be therapeutic in case of many disorders. Its anti-inflammatory action, anti-microbial, antioxidant and anti-cancer properties benefit in various disorders.

Turmeric if taken in combination with conventional treatment will definitely prove to be advantageous.

14 thoughts on “8 Benefits of Turmeric For Male Reproductive System”