Ankylosing spondylitis is arthritis that majorly affects the spine.

It comes under a group of diseases called seronegative spondyloarthropathies. These cause inflammation in joints and spine.

Ankylosing spondylitis causes inflammation of the sacroiliac joint where the spine joins the pelvis or hip bone. The bones of the spine may grow and fuse together leading to a stiff spine and stooped over posture.

Symptoms include constant pain and stiffness in the low back, the fusion of spine that may spread to hips, neck, backs or ribs and pain and inflammation in ligaments and tendons

. Chronic pain can lead to fatigue, fever, and loss of appetite.

Ankylosing spondylitis may affect other joints such as hip, knee, shoulder, and feet. It can affect other organs such as eyes, intestine, heart, and lungs.

Ankylosing spondylitis typically begins in adolescents and young adults but affects people for the rest of their lives.

Men are more likely to develop ankylosing spondylitis than are women.

Treatment is generally focussed on reducing pain and stiffness. Medications prescribed include:

How can turmeric help in ankylosing spondylitis?

Turmeric is a potent anti-inflammatory and analgesic agent and these properties can benefit in the treatment of ankylosing spondylitis.

Ankylosing spondylitis is characterized by inflammation in the lower end of the spine. Curcumin mediates its anti-inflammatory effect by :

Aggarwal et. al have listed 30 molecular targets that curcumin modulates in order to bring about its anti-inflammatory effect.

A review of 6 clinical trials demonstrates that curcumin exerts a potent anti-inflammatory effect and inhibits the activity of inflammatory mediators such as interleukin, COX enzyme, prostaglandins, TNF, thromboxane, etc.

Doses up to 8g of curcumin are found to be safe.

What does this mean?
The prime reason why curcumin can benefit in ankylosing spondylitis is that it is an anti-inflammatory agent and can help reduce inflammation, pain and stiffness in this condition.

2. It reduces pain and protects the bone

Animal study shows that curcumin’s painkiller activity is comparable to that of nonsteroidal anti-inflammatory drug, diclofenac. Similarly curcumin is as effective as aspirin in reducing pain and swelling.

Sahebkar et. al conducted a review of 8 clinical trials that assessed the efficacy of curcuminoids as analgesic or painkillers. Curcuminoids significantly reduce pain and are found to be well tolerated.

Curcumin has beneficial effects on the skeletal system. Studies focussed on the effect of curcumin on damage and pain in intervertebral disc degeneration, which is characterized by chronic low back, demonstrate that curcumin exerts anti-inflammatory and analgesic property.

Curcumin inhibits the activity of inflammatory chemicals such as interleukin and tumor necrosis factor alpha and nuclear factor kappa B which aids in inhibiting inflammation.

Curcumin, by virtue of its bone protective effect, is found to prevent osteoarthritis progression in animal model.

Moran et. al have demonstrated that curcumin works as an antioxidant and has the ability to suppress the activity of osteoblasts. Osteoblasts are cells that aid in bone formation.

Curcumin inhibits proliferation and mineralization of such cells. This could be of relevance when ankylosing spondilitis leads to the growth of bones in the spine and their fusion.

What does this mean?
Curcumin possess painkiller activity which can aid in reducing pain and stiffness in ankylosing spondylitis. It also has bone protective properties and may prevent bone cells from fusing in the spine. However adequate research is required to prove this point. 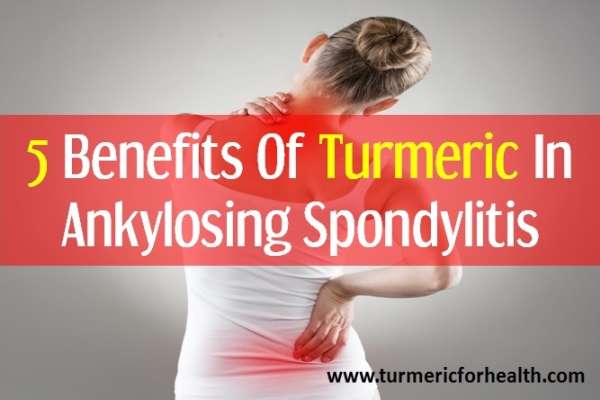 3. It is as effective as painkillers

Chandran et. al conducted a study where patients suffering from rheumatoid arthritis were treated either with curcumin (500mg) or diclofenac sodium (50mg) or their combination.

Interestingly curcumin treated group showed significant improvement than patients in the diclofenac group and no adverse effects were reported.

Curcumin in combination with diclofenac sodium is found to have a synergistic effect. Curcumin derivatives are found to be more effective than aspirin as an analgesic.

Methotrexate is an anti-rheumatic drug that is prescribed in the treatment of ankylosing spondylitis. Research suggests that a combination of curcumin and methotrexate has a stronger anti-arthritic effect and curcumin reduces methotrexate induced liver damage.

Tumor necrosis factor-alpha is a protein that mediates inflammation. Infliximab, is a TNF blocker that is prescribed in the treatment of ankylosing spondylitis. Aggarwal et. al suggest that curcumin is a natural TNF-blocker and does not cause any side effects.

Additionally it has been proven that curcumin protects from the side effects of anti-rheumatic drugs, steroids, and non-steroidal anti-inflammatory drugs.

What does this mean?
Curcumin acts in the same way as most of the drugs prescribed in treatment of ankylosing spondylitis. Studies suggest that it potentiates the painkiller and anti-inflammatory activity when taken in combination with the respective drugs and also protects from the side effects of these drugs.

4.It serves to be therapeutic in autoimmune conditions and arthritis

Ankylosing spondylitis is autoimmune arthritis of the spine. Curcumin benefits in autoimmune conditions as it has an immunomodulating effect. It prevents the occurrence of unfavorable immune reactions.

Though not investigated in relation to ankylosing spondylitis, curcumin is found to be therapeutic in various forms of arthritis.

500mg of curcumin supplementation is found to significantly reduce pain, tenderness, and swelling in patients suffering from rheumatoid arthritis.

In fact, curcumin’s anti-arthritic and analgesic activity is found to be better than that of painkiller, diclofenac sodium.

In a clinical trial, a bioavailable formulation of curcumin was tested for its efficacy in knee osteoarthritis for 8 weeks. After 8 weeks, the pain was significantly less in curcumin treated group and it also lowered the dependence on an anti-arthritic drug, celecoxib.

What does this mean?
Curcumin helps treat autoimmune conditions and exhibits anti-arthritic effect in various arthritic conditions like rheumatoid arthritis and osteoarthritis.

5. It can aid in the treatment of ankylosing spondylitis complications

Allegri et. al conducted a clinical trial where individuals with uveitis were treated with Meriva, a specialized formulation of curcumin.

Meriva was well tolerated and reduced eye discomfort and symptoms in more than 80% of the patients.

Another study reports that curcumin is as effective as steroids in treating uveitis and also does not cause side effects.
The inflammation can also spread to the heart and lungs.

Curcumin is a cardioprotective agent and can protect the heart from inflammation. It also offers protection from acute and chronic lung diseases and can work as an anti-inflammatory agent to suppress inflammation from spreading to lungs.

What does this mean?
Curcumin’s potent anti-inflammatory action can aid in preventing the inflammation to other parts of the body such as eyes, heart and lung and protect their function.

An effective way of taking turmeric that we recommend is The Golden Paste. The Golden Paste combines, turmeric, black pepper and oil which increase its absorption in the body thus leading to increased therapeutic efficacy. 1-2 teaspoons once or twice a day is helpful.

Here are some easy ways to use The Golden Paste. Turmeric milk is another delicious way of taking turmeric.

You can also include turmeric in your diet by adding it to your soups, smoothies or rice preparations. Its a great spice so you can use small to moderate amounts of it in the diet.

Turmeric in the diet is absolutely safe. If taken in excess, turmeric may cause gastric discomfort.

Turmeric supplements should be avoided in case of pregnancy and lactation. Turmeric may mildly increase bleeding risk and hence should be discontinued 2 weeks prior to surgery.

5 thoughts on “5 Benefits Of Turmeric In Ankylosing Spondyilitis”