However, turmeric, as a spice, contains significant amounts of soluble oxalates and some minerals which could lead to the formation of kidney stones or deteriorate kidney health in high-risk individuals.

Dietary consumption of turmeric is safe even for these persons, but intake of turmeric in high amounts should be avoided. Instead, curcumin supplements can be taken as they do not have oxalates.

Turmeric is known to help Kidney Health in several ways, know more about it here>

These two aspects are discussed in detail below.

Can Turmeric can prevent the formation of kidney stones 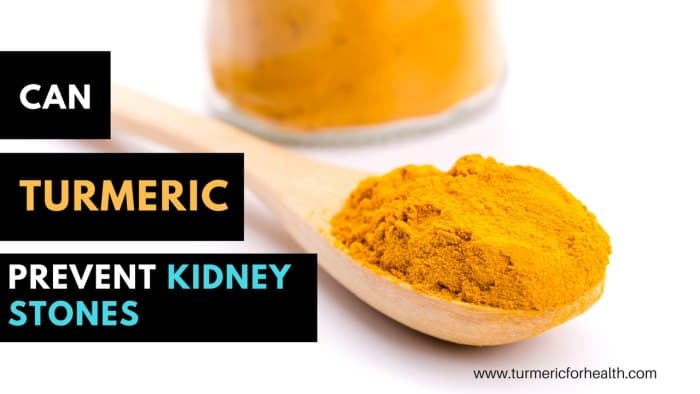 1. Calcium oxalate stones are the most common types of kidney stones

According to a 2010 study published in the Journal of Pharmacognosy Research, turmeric, due to its anti-inflammatory and antioxidant effects, can inhibit the formation of calcium oxalate stones.

Curcumin found in turmeric can lower the concentration of stone-forming components in the urine which leads to lesser calcium oxalate deposits in the kidney, without causing much damage to the tissues.

Struvite is another type of kidney stones that comprises of magnesium ammonium phosphate. The formation of these stones is usually mediated by an infection from the bacteria Proteus mirabilis. Herbal extracts like curcumin are known to inhibit struvite formation successfully.

Research shows that curcumin can inhibit the activities of the bacteria Proteus mirabilis and suppresses the growth and crystallisation of struvite.

Hence, turmeric can be used as an alternative therapy for prevention of both calcium oxalate and struvite stones more safely and effectively than other chemicals.

2. .. But Turmeric contains some stone-forming oxalates and minerals

Oxalates can combine with certain metals and form salts like calcium oxalate, which is the constituent of about 80% of kidney stones.

Turmeric contains some oxalates of which 91% are soluble oxalates.

Soluble oxalates can be more efficiently absorbed by the body and can raise urinary oxalate secretion, especially in individuals who are at an increased risk of developing kidney stones.

This includes people who have a family history or personal history of kidney stone formation.

However, dietary consumption of turmeric (1/2-1 tsp of the powder daily) is unlikely to pose a risk of any such effects, as it provides fewer oxalates, which are within permissible limits.

Formation of kidney stones is mediated by an individual’s ability to absorb and synthesise oxalates. Susceptible individuals tend to have a higher rate of oxalate absorption and synthesis.

Thus, if these persons take turmeric in high doses they may be at risk of developing kidney stones.

Also, turmeric contains some minerals, whose intake has to be limited by people suffering from or having a risk of kidney stones. Turmeric has sodium (0.038%), potassium (2.5%) and phosphorous (0.27%).

In high-risk individuals, high levels of sodium can cause hypertension, and that of potassium may create abnormal heart rhythms.

Phosphorous in high concentrations can increase the risk of bone disease by lowering calcium levels. This could further damage kidney health.

Thus, these individuals should limit the intake of turmeric, preferably to dietary levels.

However, for benefit in other health conditions, one can opt for curcumin supplements instead of turmeric supplements to lower intake of oxalates and other minerals.

A study was conducted by Sabinsa Corporation, the manufacturer of the curcumin supplement Curcumin C3 complex.

The study reported that this supplement contained just 0.025% oxalates, as compared to the 9% oxalates in turmeric powder.

The supplement was also not found to increase oxalate levels in the body or promote stone formation, even in high-risk individuals.

So, the bottom-line is, consuming turmeric as a healthy individual will lower the risk of stones, but if you are already susceptible to kidney stones, its best not to take large amounts of turmeric powder, but take curcumin supplements instead.

How to Take Turmeric and Curcumin

Taking turmeric powder is one of the easiest ways to include turmeric. As turmeric is absorbed poorly in the body, it is recommended to be taken along with black pepper or fats (oils, etc.).

If you are confused about which turmeric brands are good, you can have a look at our recommended brands section

You can start by taking 1/4 tsp per day and then slowly increase to 1-1.5 tsp as per your neededs. Turmeric as powder, as a spice, can be continued forever!

If you decide to take turmeric supplements instead, check out our detailed guide on what kinds of curcumin supplements are available in the market and which are popular brands today.

It is important to follow the dosage specification provided by the supplement suppliers while taking supplements. Also, the supplements cannot be taken for very long durations of time.

Have you used turmeric for kidney disorders? If yes do share your feedback. If you have any queries on turmeric either comment below or drop an email.