Turmeric is a perennial herb which belongs to the ginger family.

It has been cultivated widely in the Asian countries and is famous for the flavor it adds to the palate as a spice.

The yellow powder and the oil obtained from this rhizome are of medicinal value.

Turmeric is used to treat a variety of diseases ranging from jaundice, hemorrhage, cancer to skin diseases and allergies.

Turmeric is reported to find its use in treating respiratory disorders. A warm cup of milk and turmeric powder is one of the revered home remedies for cough.

This article investigates the role and use of turmeric in one of the most widely affecting respiratory disorder, pulmonary tuberculosis.

What is Pulmonary tuberculosis?

Pulmonary tuberculosis (TB) occurs when the lungs are affected by the bacteria Mycobacterium tuberculosis. The disease spreads through sputum released through coughing or a sneeze from the infected individual.

These bacteria then reach the alveoli (small air sacs in the lung responsible for the exchange of carbon dioxide and oxygen) where they are identified as foreign bodies and engulfed by a specific type of white blood cells for the purpose of eliminating them.

This temporary storage of the bacteria in the white blood cell proves to be hazardous as the bacteria reproduce inside it and eventually kill it.

The infection then spreads via blood or lymph. Multi-drug resistant strains of this bacterium have developed, making this disease a serious public issue as long and expensive treatments are involved.

Few of the symptoms associated with TB are:

Components in Turmeric contributing to its bioactivity

The active components of turmeric are the curcuminoids.

Curcumin comprises 0.3-5.4% of raw turmeric. The volatile oil of turmeric is primarily made up of tumerone, atlantone and zingiberone.

You can check more about turmeric components here>

Other constituents include sugars, resins, and proteins. Curcumin is one of the prime compounds responsible for the health benefits imparted by turmeric.

TB, as mentioned previously, is caused by Mycobacterium tuberculosis (Mtb). Turmeric exhibits various bioactive properties such as anti-inflammatory, anti-oxidant, antimicrobial etc which can be optimized for helping tuberculosis patients. 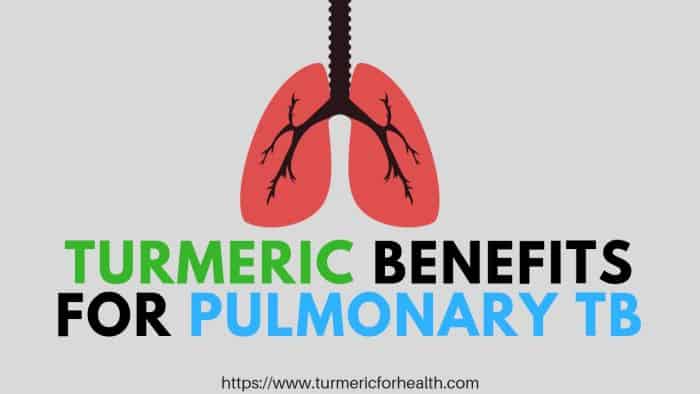 A recent study conducted in China reports that curcumin can protect macrophages (a particular white blood cell that ingests foreign bodies and debris) against Mtb.

P19 is a lipoprotein that is found on the cell wall of the bacteria and is also secreted by it. This protein contributes to the bacteria’s virulence and is responsible for the infection.

P19 activates the immune system and causes death macrophages. In this study curcumin, at a low dose, has found to reduce the macrophage growth inhibition caused by P19.

It does so by inhibiting the activity of certain biochemical pathways which cause inflammatory responses. This result exhibits the use of turmeric’s anti-inflammatory property.

Mtb possesses a proteasome system which is nothing but a protein complex that is responsible for cell cycle and cell death.

The proteasome in Mtb resists this line of defense of the immune system.

A 100 plant-derived natural products were screened for inhibitory activity against the proteasome.

Curcumin was reported to have 69.53% inhibitory activity against Mtb proteasome.

2 million people die each year due to an Mtb infection and hence this bacterium has been studied greatly, so as to find different targets which can be manipulated in order to suppress and kill the infection.

Turmeric makes use of its variety of bioactive properties to combat an Mtb infection.

As an anti-inflammatory agent, turmeric modulates many enzymes, proteins and other agents which are responsible for the immune response of the body.

As an antioxidant, it consumes and controls reactive oxygen species and reactive nitrogen intermediates, which although are necessary for the immune response of the system, but in excess, they can cause tissue damage.

Also, turmeric is an immunomodulatory agent that is it does not debilitate an individual’s immunity; it can enhance the antibody production and destroy the infection.

We can observe how turmeric’s anti-inflammatory and antioxidant properties destroy the Mtb infection.

Symptoms associated with TB are similar to those seen in the chronic obstructive pulmonary disease.

Curcumin’s anti-inflammatory property has been proven crucial in the treatment of bronchial asthma.

A study was conducted in Lucknow, India on 77 patients suffering from bronchial asthma wherein these patients were divided into 2 groups.

These symptoms are also seen in TB patients and hence we can observe that curcumin can be used to treat individual symptoms of tuberculosis.

The anti-inflammatory property of curcumin finds its use in curing respiratory disorders associated with pulmonary TB.

Few of the symptoms associated with TB are drug induced.

Turmeric has antioxidant properties which can reverse these effects brought about by the drugs. Curcumin inhibits lipid peroxidation and scavenges reactive compounds that cause it.

A research was carried out on a herbal formulation containing curcumin enriched turmeric extract to study whether it can prevent ATT induced hepatotoxicity.

The herbal formulation decreased hepatotoxicity significantly and no side effects were reported.

In rare cases, ATT is reported to cause a skin rash. It is characterized by skin eruptions, redness, and itching sensation. It is a rare but potentially life-threatening complication of ATT.

Though no direct research has been performed on the use of turmeric to cure ATT induced rash, turmeric is reported to be effective against scabies, psoriasis, skin tumors, etc.

The antioxidant, anti-inflammatory and wound healing properties of turmeric can prove to be helpful in dealing with ATT induced rash.

Multidrug-resistant strains of Mtb, that are resistant to ATT, have emerged and account for 5% of TB cases worldwide.

A study in Thailand investigated the effect of 55 analogs (modifications of original compounds) of curcuminoids against Mtb.

One of these compounds showed high inhibitory activity against multidrug-resistant Mtb and was found to be 2 fold more active than isoniazid, a drug that constitutes ATT.

Another study reports that curcumin inhibits the activity of a specific protein that is essential to the process of cell division and cell growth.

This protein has been identified as a valid antimicrobial target in multidrug-resistant strains of Mtb.

Research indicates that Curcumin’s antimicrobial activity is effective against multidrug-resistant strains of Mtb.

Fatigue is a result of compromised immunity.

Curcumin treatment was given to mice subjected to a stress test to study its effect on chronic fatigue syndrome and curcumin was reported to enhance the ability of mice to tolerate the stress.

Levels of various proteins and enzymes involved in immunological response were measured and these levels reported that curcumin activated the immune response.

The immunostimulant properties of turmeric have also been validated in a study conducted on intoxicated mice and it was suggested that turmeric boosts the immune system by altering the action of cytokines (proteins involved in immune response and cell signaling).

Traditional use of Turmeric in treating Pulmonary TB

Symptomatic treatment of pulmonary tuberculosis can be carried out by making use of traditional remedies involving turmeric.

Nasal congestion can be treated by inhaling fumes of burning turmeric.

To cure fever, a mixture of quarter teaspoon turmeric powder, a small piece of ginger and 10 black peppercorns are boiled in 1 ½ glass of water till it reaches half a glass concentration. Honey is added to this and is consumed 3-4 times a day.

1 to 2 g of turmeric powder taken with ghee or honey can treat a cough.

Turmeric milk is known to cure a cold and cough. It also improves an individual’s immunity.

Take ¼ teaspoon of turmeric and bring it to boil in 1 cup milk.

As such, there is no prescribed dosage of turmeric for pulmonary TB.

Turmeric is consumed in Asian countries in the range of 200-1000mg/day. No adverse effects have been reported from turmeric being consumed as a culinary spice.

Fats / Oils enhance the bioavailability of turmeric, which is otherwise low. Thus, making Golden Paste from turmeric powder is one of the best ways to take it.

If you are confused which turmeric powder brand to buy, here are some recommendations

Turmeric as a spice / powder is very safe.

Turmeric supplements are to be taken with caution because overdosing, allergic reactions or interaction with other drugs can lead to complications.

In case of surgical procedures, they should be discontinued 2 weeks prior to the procedure as turmeric has blood thinning property.

TB is one of the oldest maladies that the human population has been suffering from despite the development of antibiotics and vaccines specific to it.

Multidrug-resistant strains of Mtb is making the anti-tuberculosis treatment longer, expensive and in some cases, even ineffective. A line of defense involving curcumin against Mtb is still to be developed.

Turmeric still finds its way to cure pulmonary TB by means of remedies specific to individual symptoms and these remedies are relics of traditional medicine.